Marvel: Avengers Alliance Wiki
Register
Don't have an account?
Sign In
Advertisement
in: Brotherhood of Mutants, Organizations, Villains by Organization,
and 3 more 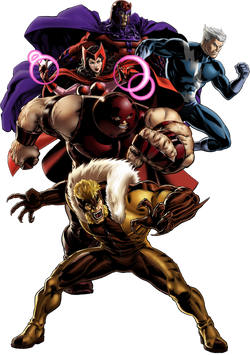 The Brotherhood of Mutants, originally known as the Brotherhood of Evil Mutants, is a group dedicated to the cause of mutant superiority over humans. The group's roster and ideology have varied from incarnation to incarnation, ranging from world domination to serving as a terrorist group that targets anti-mutant public figures. They are almost always at odds with the more peaceful X-Men, though on rare occasions the two sides have allied against a common threat.

The Brotherhood was founded by Magneto and its members were his primary allies in his early battles with the X-Men. The original Brotherhood ultimately disbanded, with two members, Quicksilver and Scarlet Witch, going on to become members of the Avengers.

The Brotherhood of Mutants was revived under the leadership of Mystique and was later led by Toad. With each additional incarnation, the group abandoned its political ideology and regressed to the status of "hired goons. Later incarnations have sought to return to their political roots.

Note: Before joining the X-Men, Rogue was a member of the Brotherhood. For that reason, many X-Men, especially Wolverine, didn't trust her on the first few days.