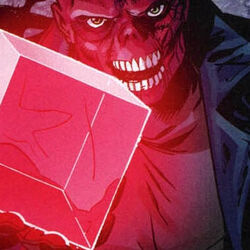 "All-out war erupts among Syndicate members vying for control of Iso-8, and Syndicate wannabes looking to prove themselves. It's a battle royale and New York is the battlefield. S.H.I.E.L.D. is all that stands between eight million New Yorkers and utter devastation. "
— Chapter Briefing

"Rumors of Loki's demise were greatly exaggerated. He's been using the Wrecking Crew to advance the chaos across the city."
— Mission Preview

"Red Skull's return has thrown HYDRA into chaos. Normally that would be a good thing, but New York is caught in the middle of Zemo and Viper's power struggle."
— Mission Preview

"The Hood has gathered all the forces of the underworld to make his move. And if the Hood is involved, chances are Dormammu and the Dark Dimension are as well."
— Mission Preview

Location: Little Italy
Team-Up: Dr. Strange (only for The Hood and Dormammu)

"Villains of all kinds are flocking to New York. It seems everyone is making an appearance... except for Dr. Doom. Where is he?"
— Mission Preview

"Dr. Doom's game is revealed: the Syndicate was a lure, and S.H.I.E.L.D. has taken the bait. Doombots pour forth from the Latverian Embassy to meet them."
— Mission Preview

Location: Latverian Embassy
Unlock Requirement (and Team-Up): Recruit Mr. Fantastic
Note: This mission scales to your Agent Level regardless of mastery level. In addition, this is the only mission in all of Chapter 12 that has normal fights.