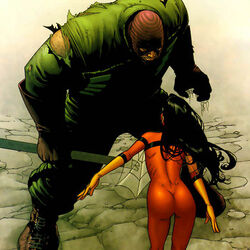 "Renegade Asgardians are on the move again, with Loki pulling their strings. He seems to be working in concert with HYDRA... and assisting them as they create a new breed of Iso-8-powered villain. At the same time, strange and dire magics are brewing in the secret corners of the city."
— Chapter Briefing

"A.I.M. has taken over a lab complex on the Empire State University campus. Thousands of students are in danger, and whatever A.I.M. is cooking up in the lab will only make things worse."
— Mission Preview

"The Wrecking Crew is rampaging through chinatown breaking into small factories and werehouse. What do they want? Stop them from getting it."
— Mission Preview

"The renegade Asgardians aren't done. There are Jotun near the Brooklyn Bridge, and Loki himself has a dire plan for the city."
— Mission Preview

"Hydra has used Iso-8 to create their own version of the Avengers. Put these impostors where they belong."
— Mission Preview

Retrieved from "https://avengersalliance.fandom.com/wiki/Chapter_5_-_Gods_%26_Monsters?oldid=818922"
Community content is available under CC-BY-SA unless otherwise noted.