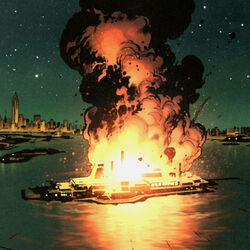 "Mutants are starting to march. They want rights, and they want Iso-8. Opposition mobilizes, and New York becomes a powder keg...which may be exactly what Magneto wants. Meanwhile, the Maggia and the Hand are cooperating on a mystical ritual that may open some extremely dangerous doors."
— Chapter Briefing

Mission 2 - I Predict a Riot Edit

Recruitment Note: When the game was first released, players were required to recruit Colossus to unlock this premium mission. In later versions of the game, players are required to recruit Phoenix in order to unlock the chapter. This premium mission not being unlocked after Phoenix was recruited was deemed to the devs as a known issue, so for players to be safe, both Colossus AND Phoenix should be recruited before players attempt this mission.