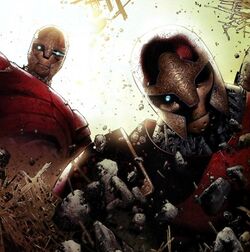 "SHIELD is caught in the middle of ongoing riots between mutants and anti-mutant zealots… including some in Congress. At the same time, HYDRA and the Hand enter into an alliance. But why?"
— Chapter Briefing

"Technology and magic are a bad combination and AIM intends to prove that point. With rogue Sentinels in tow, AIM has blocked access to a portal in the NY Public library. Only Hulk can clear the way."
— Mission Preview

"Another outbreak of experimental mutants! They're getting stronger, too. Magneto's going to have his own army if we don't do something."
— Mission Preview

"Sentinels were sent in to keep the peace and end the mutant riots. They appear to have misunderstood their orders."
— Mission Preview

"HYDRA and the Hand would be strange comrades even in normal times. But now, the Hand looks to have found a new use for the portals to the Dark Dimension, and it's ugly. Almost as ugly as the Mindless Ones."
— Mission Preview

"Jotun around the UN means Enchantress and Executioner can't be far away. But what are they looking for? And where is Loki?"
— Mission Preview