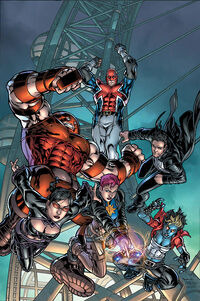 Excalibur is a superhero group based in the United Kingdom. The original Excalibur first appeared in Excalibur Special Edition (1987), also known as Excalibur: The Sword is Drawn.

The first Excalibur consisted of the British superhero Captain Britain, his lover Meggan, and several one-time members of the X-Men and related mutant teams. An eponymous series featuring the team lasted from 1988 until 1998. Originally, the series involved cross-dimensional travel that incorporated as many elements of Captain Britain’s mythos as it did the X-Men’s.

Between Excalibur’s disbandment and reformation, a short-lived series entitled Excalibur chronicled the efforts of X-Men founder Professor Charles Xavier and his former nemesis, Magneto, to rebuild the mutant homeland of Genosha. Although written by Claremont with the same title, it had no connection to the superhero team. Most of the members of that team were new characters or Morlocks who had come to Genosha. One notable exception was Omega Sentinel. This series was her origin in the comics, but this series of events seems to have not occurred in MAA.

(Note: Lockheed is technically also an in-game member as he appears for some of Kitty Pryde's attacks/passives)