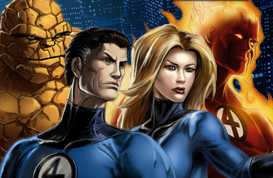 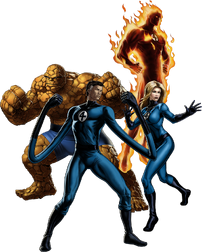 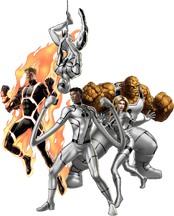 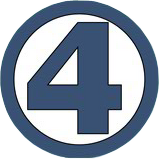 The brilliant aeronautical engineer Reed Richards inadvertently created the Fantastic Four after deciding to make an unauthorized test flight into space using an experimental rocket of his own design. While the rocket might have made it possible to travel to other star systems, Reed's financiers were losing interest. Reed's girlfriend Susan Storm and her younger brother Johnny insisted on joining Reed on the flight. Reed's old friend Ben Grimm was convinced to pilot the rocket. Once in space, the rocket was bombarded by a wave of cosmic radiation. The craft crashed back down to Earth. Emerging from the ruins of the spaceship, they discovered the radiation had mutated their bodies and had given them remarkable new abilities. Reed gained the ability to stretch his body and limbs, Johnny was able to fly and become engulfed in flames he could control, and Sue was able to bend light around her body and become invisible. Ben gained incredible strength and durability, but his body was tragically transformed. He now had a muscular orange, rock-like hide.

All four decided to use their powers to better humanity, and founded the Fantastic Four. Individually they call themselves Mr. Fantastic, Invisible Woman, the Human Torch, and the Thing. They are not superheroes in the traditional sense, but rather explorers, facing whatever challenges that may arise as a family. The profits from Richard's patents and royalties fund the team's activities.