Marvel: Avengers Alliance Wiki
Register
Don't have an account?
Sign In
Advertisement
in: The Illuminati, Organizations, Heroes by Organization 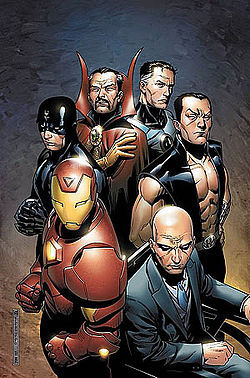 The "Illuminati" was a secret organization comprised of several of the world's most powerful heroes: Sorceror Supreme Doctor Strange; Black Bolt, King of the Inhumans; Charles Xavier, founder of the X-Men and mutant rights activist; Mr. Fantastic, founding member of the Fantastic Four; Namor the Sub-Mariner, King of Atlantis; and Iron Man (Anthony Stark), founding member of the Avengers. These six men worked together for an unspecified amount of time to mold and shape the status of the superhuman world and the world around it.

Originally, Tony Stark united these men along with the Black Panther shortly after the Kree-Skrull War had first involved Earth. He suggested they form a mega group that would be prepared to face such similar threats by uniting all of the existing super teams and groups. Eventually, the idea was minimized in scale to a secret cabal that would share information and decide secretly how all of the individual groups would correspond, with T'challa choosing not to join the group.

The group met to discuss a variety of issues, including the return of the Sentry. The group lasted until Iron Man decided to trick the Hulk into going into space, then sending him off from Earth to a distant planet. With Namor leaving because of his disagreement with the choice and Professor Xavier having disappeared after the Scarlet Witch warped reality, the group disassembled. They came together once after, when Iron Man announced the impending Superhuman Registration Act, and asked that they all strongly agree in public in order to prevent a civil war. Again, the group was divided when most declared their opposition to the Act, leaving Iron Man and Reed Richards to dissolve the group. However, Iron Man called the group together one last time when the latest assemblage of Avengers discovered a Skrull posing as the assassin Elektra. While trying to figure out exactly what to do about the situation, Black Bolt revealed himself to be a Skrull as well and attacked the rest of the Illuminati. This new type of undetectable Skrull super soldier almost succeeded in eliminating Iron Man and his group, but Namor managed to kill the alien warrior before that could happen. Iron Man then destroyed the next two Skrull soldiers that attacked, but it was already too late. The alien invaders completed their task of planting the seed of mistrust within the members of the Illuminati. Namor was the first to take his leave, and the rest soon followed. Only time will tell if Earth's heroes can find a way to trust each other again and repel this secret invasion before the planet is lost.

Each member of the Illuminati represents a different aspect of society and point of view, which is part of the reason they formed. Each member is also considered to be an unparalleled master of their domain or area of expertise.

Iron Man (Tony Stark): The master of technology and a founding member of the Avengers. Represents the technological and military/industrial communities. Also represents the Avengers and the type of hero who would work with the government.

Namor: The master of the oceans. Represents the underwater realms and Atlantis. Also represents the anti-hero.

Mr. Fantastic (Reed Richards): The world's greatest scientific intellect and the leader of the Fantastic Four. Represents the scientific and intellectual community.

Professor X (Charles Xavier): The world's most powerful mutant mind and the founder of the X-Men. Currently deceased, he represented the mutant population and community.

Doctor Strange (Stephen Strange): The master of magic. Represents the mystical/magical community and population, as well as that edge of society.

Captain America (Steve Rogers): The first true super soldier, an unparalleled leader, and master military strategist. Represents the American ideal. After the crisis involving the Hood obtaining a portion of the Infinity Gems, Captain America was invited to join the Illuminati. He agreed after realizing that some things were meant to be kept secret. However, Cap is no longer a part of the Illuminati after the start of the threat of Incursions, as his ideals compromised the group's plan to save their reality.

Beast (Hank McCoy): Current representative of the mutant population and community after the death of Charles Xavier in Avengers vs X-Men.