"Stop Heroes from another Earth!"
— Incursion

"During an Incursion, you will need to fight off a strike team from a parallel dimension, intent on destroying our world to save their own.
Defeat them to keep our reality safe. Chance to get great rewards!"
— S.H.I.E.L.D. Intel

An Incursion is a type of encounter involving a battle against a team of Heroes from another Earth. Incursion was introduced alongside Heroic Battles on Story: Season 2.

Incursion can be found as a Red Icon of two combined circled depicting colliding worlds on the current Mission's Map. It costs 10 Energy to start an Incursion. Combat in Incursion are done in different Combat Backgrounds that have red-tinted skies.

Incursion will pit the player's team against another player's team, with the opponent being controlled by A.I., similar to PVP. The main differences with Incursion from PVP is that players can set and arrange their team according to what they see on the opposing enemies' team; something that is impossible to do in PVP. The usage of Items in Inventory and the use of Distress Calls are also allowed inside the fight. As this is not considered a PVP fight, Hero and Item Bonuses in PVP do not apply and are not in effect for Incursion combat. However, unlike PVP, no XP for the Agent and the Heroes can be gained from Incursion battles. Incursions are not necessarily required to be finished in order to unlock the Epic Boss battle in the Mission, but can be used to finish Deploy Missions faster.

If players are successful from an Incursion, players have a chance to get a reward in the form of selecting one mystery box. The rewards range from random Energy and Challenge Point Resources to Store and previously Limited Edition PVP Resources. There are also chances for specific previous PVP Tournament Diamond League Gear.

As Marvel Gaming Universe (Earth-12131) exists in the Marvel Multiverse with the mainstream comics Universe, Marvel: Avengers Alliance will also be affected by this ongoing event. Incursions will play an important role all throughout the Story's second Season. Agent Coulson will be greatly involved in regards to everything in the Season about Incursions.

Agent Coulson notifies Nick Fury about the space-time disruptions that he was observing. Coulson reports that alternate versions of existing people in Earth are coming out of these disruptions and that Coulson is working on pinning down its cause. Agent Coulson has called this phenomenon "Incursions". Nick Fury introduces the Agent to Agent Coulson who has been leading the investigation on Incursions, much to Tony Stark's surprise of a team dedicated to it. Tony Stark is then briefed about the Incursions afterwards.

At Wakanda, Black Panther's researchers have found new information about the nature of Incursions, but he does not want to transmit his findings. Storm was sent instead to Wakanda to gather the data in person. When she returned, she had already brought the information to Mr. Fantastic at Baxter Building. Agent Coulson headed over to Baxter Building afterwards.

The idea of Incursions originated in the mainstream comics universe (Earth-616) and is the central plot point of New Avengers Volume 3.

Incursions were explained by Mr. Fantastic to the Illuminati at New Avengers Volume 3 #2. 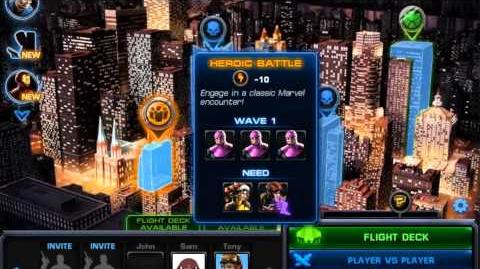