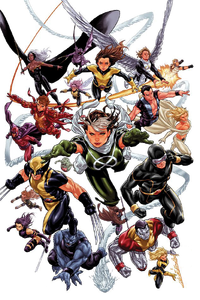 Homo Sapien Superior is a term coined by Magneto to refer to Mutants; those born with a genetic anomaly that grants them an extra-normal ability not possessed by normal humans.

This anomaly is known as the "X-Factor" or "X-Gene".

Mutants are subdivided according to the extent, power or external perceptibly of it's manifested Abilities, into 6 categories or "Levels":

1) Alpha Level Mutants
The Alpha Mutants are the second most powerful and feared mutants. Alpha`s have extremely powerful mutant traits without any significant flaws. Less than 10% of mutants are Alpha mutants so they are very rare. They have a normal human appearance and their mutation is powerful, useful and controllable (i.e. turn it on and off, direct it at will.) Some of the Alpha mutants include Gambit, Psylocke, Storm, Colossus, Kitty Pryde, Magik, Emma Frost (Disputed), Scarlet Witch (Disputed), Quicksilver and Professor X (Disputed)

2) Beta Level Mutants
Beta Mutants are on the same power level as Alpha-level mutants. But the difference between them is that the Beta`s have flaws, albeit very small. This level is also about 10% of the mutant population. Beta Level`s have a normal human appearance (or close to it) and their mutation is powerful, useful, but less controllable. Some examples are Rogue, Mystique, Havok, X-23, Toad, Cable, Cyclops and Wolverine.

3) Delta Level Mutants
Delta Mutants don't have any significant flaws. However they don't have powers that match an Alpha mutant, or even a Beta or Gamma mutant. At least 50% of mutants are Delta's making them the most common type of mutant. They have a normal human appearance, but their mutagenic powers are weaker or only narrowly applicable, though still controllable. Some Examples are Trance, Blindspot, Annalee, Masque and Prodigy.

4) Epsilon Level Mutants
Epsilon Mutants are the unfortunate ones. Epsilon`s pretty much have no chance of having a regular life in society due to their major flaws, and they also only have minor superhuman powers. About 20% of mutants are Epsilon Mutants. The Epsilon Level have an inhuman appearance or their mutation makes it impossible for them to function normally. Any accompanying "superpowers" would be next to useless. A good example of Epsilon mutants are Beak and Bliss. A lot of Epsilon Level Mutants are members of the underground civilization The Morlocks, living in bunkers underneath Manhattan.

5) Gamma Level Mutants
Gamma mutants have very powerful mutations, but they have flaws. while Alpha and Beta mutants can pass as regular looking humans, many Gamma mutants cannot because they have physical impairments or deformities like Blob or Marrow. Their mutation is powerful, uncontrollable, sometimes useful but usually detrimental to living a normal life, such as a monstrously inhuman appearance that can't be switched off at will. Good examples are Nightcrawler, Beast and Sabretooth.

6) Omega Level Mutants
Omega mutants are, in theory, supposed to be the most powerful class of mutants. Originally omega mutants were beings with vast control over matter and energy, such as Phoenix, Iceman, Legion, James Jaspers, etc. The term "Alpha mutant" can, but does not necessarily, intersect, but the distinction is usually blurry, and varies depending on the writer. Other Examples are Hope and Magneto.