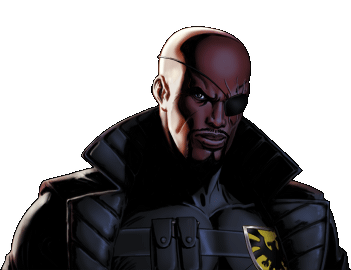 Colonel Nicholas Joseph "Nick" Fury became a legendary hero in the early years of World War II. After the attack on Pearl Harbor that led the US to officially enter the war on December 7, 1941, Fury fought the Nazis in Northern Africa, then was reunited with Captain Sawyer, who made Sgt. Fury the leader of the US Rangers’ First Attack Squad, soon nicknamed the “Howling Commandos” for their boisterous battle cry. The Howlers occasionally worked alongside Captain America.

During one mission, Fury’s left eye was damaged by a grenade and his lack of medical care eventually aggravated the wound. At one point, Professor Berthold Sternberg gave Fury the “Infinity Formula,” which retarded Fury’s aging process, although it required him to take regular injections to stay alive. Late in the war, Fury joined the OSS and with the war’s end joined their post-war CIA agency.

In recent years, Fury was selected as director of S.H.I.E.L.D., an international intelligence agency equipped with state-of-the-art technology by Tony Stark. As leader of SHIELD, Fury faced the likes of Hydra and A.I.M., among others. Fury was reunited with Captain America, who survived years in suspended animation, and the two rekindled their friendship. When SHIELD was beset by a conspiracy at its highest level by the Deltite, Fury allowed the organization to disband and later rebuilt it as a smaller unit he could more closely monitor. 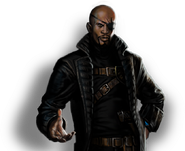 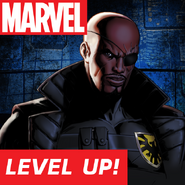