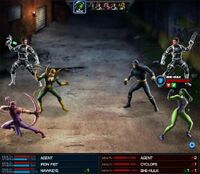 Player versus Player (or simply PvP) combat is initiated from the PvP screen. Each fight requires the use of a Challenge Point.

Players challenge other players in a three-on-three team battle. After choosing to start a fight, players are able to access information regarding the opposing player's name, level, and rating, as well as their PVP Bonuses, Hero information, and weapons currently slotted.

It can be unlocked by completing Season 1 Chapter 1 - Mission 4. After unlocking you can get one of the five heroes for free. The following heroes are: Cyclops, Invisible Woman, Iron Fist, Ms. Marvel, and She-Hulk.

In combat, it is similar to PvE but you cannot use Supplies and Distress Call.

The forfeit button located on the bottom tray allows you to abandon the current PVP. The fight will be counted as a loss. Does not count in PVP Tasks.

There are multiple types of PvP Strategy.

Your agent, gear, and heroes use in attacks.

Your agent, gear, and heroes use for A.I. in defense.

At the bottom tray, displays your current league, rating, attacks, and the PVP Bonus Spin.

"PVP is where S.H.I.E.L.D. agents compete to have the best strike team.
Ladder competitions are broken into Seasons. Each Season is a fresh start, allowing agents to begin on an even playing field.
Rating is a measurement of your success. Rating increases by defeating opponents and decreases after being defeated. This determines your rank on the Ladder.
While a Ladder Season is active, click on the large Tournament Fight button to compete in the Ladder. An opponent will be automatically chosen for you.
The first five Tournament Fights per day provide a bonus to XP awarded.
Use the Practice button to test your team's strength against a variety of opponents. Practice battles don't cost challenge points, but don't affect your Rating or award XP.
The Information tab gives you access to details on rewards, the ladders, and battle reports for the current Season.
The Battle Reports button shows a history of battles that you have initiated or that others have initiated against you.
Agents can increase their performance in PVP by recruiting heroes and equipping their armory.
Heroes provide a stat bonus depending on the class of the hero Blasters provide attack, Bruisers defense, and so on.
The higher the hero is, the more bonus they provide.
Items can be placed in the Armory to provide a bonus to offensive or defensive stats.
The amount an item contributes to offense or defense in PVP is listed on the item description.
Improve your bonus so you can defeat even the toughest foes.
Now that you know the basics, get out there and prove who the best S.H.I.E.L.D. agent is."
— S.H.I.E.L.D. Intel

Help button is located at the top right of the interface.

Learn how to improve your bonuses and rating in PVP. Rating is a way of measuring a player's relative performance in PVP. When the a player wins a PVP match, their rating increases, while the loser's rating decreases by an equal amount. The amount gained or lost depends on the players rating before the match.

Recruit Heroes and raise their levels to increase this bonus.

Each hero recruited improves the stats of the player's team during PVP battles. The amount and stat each hero improves depends on factors such as agent level, hero level and the hero's class.

Changing the class of a hero by buying and equipping new uniforms will also change the stat increased.

Each hero has a Base Bonus, which is increased for every Agent level.

BASE bonus is the same for all classes, except:

Tactician: Health bonus is 600% of normal BASE

Generalist other stats= 20% BASE

Each hero also has a Level Bonus, which is calculated from the BASE value.

At hero levels 10 to 14, they are given an additional bonus, which is a percentage of the BASE bonus.

The Base Bonus + the Level Bonus + the Elite Bonus = Total Bonus, which is rounded up or down.

To increase your chances of victory, you can assign permanent attack and defense bonuses to your team via items in the Armory. Each Armory page has 12 slots, with up to 5 Expansion pages available for research. The first page is available when you reach Level 25.

Each item put in a slot is removed permanently from inventory and may no longer be used by the Agent. When you acquire a more powerful item you can substitute any occupied slot by placing the new item into the slot.

Locates on the bottom right of the interface. Upon winning 5 PVP matches per day you can open the reward box to get a free daily spin. The PVP Daily Spin holds past PVP bonus items, a powerful weapon, CP, Gold and extra challenge points.

PVP Interface as of February, 2013