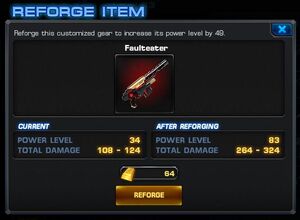 Reforging is a method to upgrade customized weapons and gadgets to the current level of the Agent by spending Gold.

Previously, the cost of reforging a weapon or gadget was variable, with prices of 24, 32, 48, and 64 Gold being reported. The reason for variable pricing is an attempt to see what price the market will bear.

Reforging was introduced on January 17, 2013. When it was first introduced, reforging was available to only a few people at a time while Playdom rolled it out slowly. It is now fully implemented.

Weapons That Can Be Reforged

All reforgable gear can now be found listed here.

NOTE: Currently (August 2014), reforging a weapon brings it up to the agent's level only, even if the weapon is normally obtained several (5, 10 or 15) levels higher than the agent's level. This means that right now obtaining a maxed-out weapon is only possible by getting it directly, not by reforging. Whether this is a bug or intentional is unknown.