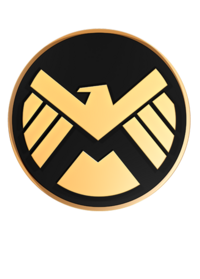 S.H.I.E.L.D. (Strategic Homeland Intervention, Enforcement, and Logistics Division) is an extra-government intelligence and security organization dedicated to protecting the nations and peoples of Earth from all threats, terrestrial or extraterrestrial. S.H.I.E.L.D. was organized a little over a decade ago by Nicholas Joseph Fury to meet the threat of the highly technological subversive organization called Hydra.

S.H.I.E.L.D.’s Supreme Headquarters is the huge mobile Helicarrier, but there are also regional offices in all the major cities of the free world. Although most of S.H.I.E.L.D.’s operations are covert, the organization’s existence is known to general public. S.H.I.E.L.D. even maintains public offices in several cities.

S.H.I.E.L.D. is currently lead by Col. Nick Fury and his second in command, Maria Hill.

After a world wide event called The Pulse causes a blackout, villains from all over converge of New York, lured by a mysterious substance, Iso-8. Nick Fury summons the Avengers to investigate the cause of the event and Iso-8. Stationed in the Helicarrier, Fury and Maria Hill coordinate with the various heroes around the city, helping to track down the locations of the villains.

Retrieved from "https://avengersalliance.fandom.com/wiki/S.H.I.E.L.D.?oldid=910594"
Community content is available under CC-BY-SA unless otherwise noted.