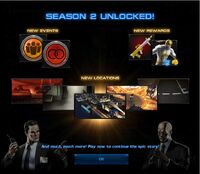 Each chapter has a number of requirements to be completed in order to fully master it. These requirements are:

Mastering all the requirements yields various rewards for the player.