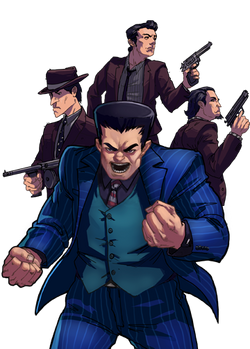 The Maggia is an international crime syndicate that is the world's most powerful organization dedicated to conventional crime (as opposed to subversive activities). Originating in southern Europe, the Maggia spread throughout non-Communist Europe and the Americas. Its presence in the United States first came to public attention in the 1890s, and the Maggia's widespread bootlegging of illegal liquor during the Prohibition Era has become legendary. Today the Maggia controls most of the illegal gambling, loan-sharking, and narcotics trade in the United States, as well as many legal gambling casinos in Atlantic City, New Jersey and Las Vegas, Nevada. It also has great influence within various labor unions, and controls politicians on every level of government. Especially in recent years, the Maggia has invested many of its illegal gains into legitimate businesses. However, the Maggia enforces a strict code of secrecy among its members, and does not hesitate to punish betrayals and failures with death. Often the Maggia marks one of its members for execution by having a Maggioso grasp the intended victim by the chin in the so-called "Maggia touch."

The Maggia is not monolithic organization but is instead a coalition of many virtually independent groups known as “families”. The leading members of each family are usually connected through familial or marital ties. The Maggia also has affiliations with other criminal groups such as the Morgan organization in New York City’s Harlem. Several “families” are based in the New York City area. Three of these families have come to pre-eminence: The Silvermane Family, the Hammerhead Family, and the Nefaria Family.