Marvel: Avengers Alliance Wiki
Register
Don't have an account?
Sign In
Advertisement
in: The Worthy, Organizations, Villains by Organization 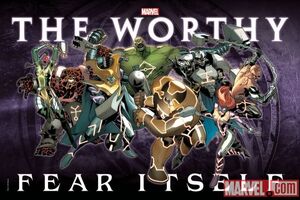 The Worthy are the Serpent's elite vanguards and agents of destruction. The eight superpowered beings who can wield those hammers are granted immense magical power and are possessed by the evil spirits that are associated with the Serpent. Sin was the first one to lift the Hammer of Skadi and transform into Skadi who frees the Serpent from his magical prison. He then sends seven more hammers to Earth which are lifted by seven more people

Every one of the Worthy helped the Serpent to spread fear around the Earth. The first Worthy to be dispossessed was the Thing, with the help of Franklin Richards and his reality alteration powers. After the final battle when the Worthy were defeated by The Mighty and the Serpent killed by Thor, their hammers were taken away from them by Odin. Nul was the only one who seemed to be still free on Earth, for that, Hulk searched for the help of Doctor Strange.