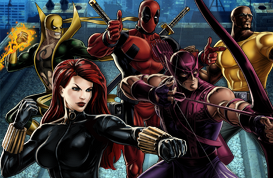 The Thunderbolts is a group of reformed supervillains. After a mysterious Pulse affected technology worldwide, the Thunderbolts helped S.H.I.E.L.D. in the mission to face new threats such as supervillains empowered by a mysterious element the Pulse left on Earth, the Isotope-8, and an organization made of different criminal groups with the aim to control the Iso-8, the Syndicate, lead by Doctor Doom.

Originally, the Thunderbolts were another version of the Masters of Evil led by Baron Zemo. After the Avengers and the Fantastic Four were seemingly killed in action, Zemo soon decided to have his Masters of Evil act as heroes and gain access to files and equipment from S.H.I.E.L.D.. It worked faster than Zemo anticipated and the team's newest recruit, Jolt, managed to have the former villains to have second thoughts about being villains. When the Avengers and the FF returned, Zemo decided to play his hand by revealing his team's true identies. Zemo had hoped to blackmail them to serve him, but the team turned against him forcing him to use mind-controlled Avengers and FF to fight them. The team soon was able to break Zemo's control over them and make their escape.

The remnants of the Thunderbolts were in Colorado when the Avenger Hawkeye made them an offer: MACH-1, Abner Jenkins, (Originally the Beetle) had to surrender himself to authorities (as he was wanted on a murder charge) and the entire team would be granted pardons. However, as complicated plots evolve, the team later learns that Hawkeye originally lied about them getting pardons. And the end of the plots, Hawkeye manages to blackmail Commission of Superhuman Activities Agent Henry Gyrich into giving the team their pardons, but Hawkeye still had to go to prison for his actions.

After the much of the team is eliminated (save for Jolt, Citizen V/Zemo, Fixer, Moonstone, Jenkins as MACH-III, Erik Josten and Dallas Riordan) in a failed reformation team called the Redeemers, Hawkeye is contacted by S.H.I.E.L.D. with a pardon offer. As the Crimson Cowl devised a serum that would make all the villains on Earth into her loyal army at her beck and call, the team was brought back together to stop her. The T'Bolts manage to stop her but the team was sent to Counter-Earth to seal a time-space dilation. After the rift is closed and the Bolts brought back to Earth, the team is left in the leadership of Baron Zemo, who convinces Hawkeye that he wishes to reform. This was a semi-lie as Zemo wanted to save the world, but also rule it.

During the Heroic Age, Luke Cage leads a new team of Thunderbolts based from the Raft alongside T'Bolt veterans MACH-V, Fixer, and Songbird. The team recruits Juggernaut, Man-Thing, and Crossbones on the team. After the Man-Thing is broken out by his friend Jennifer Kale, the team realizes how susceptible the Raft is to magical attacks. With the assistance of Dr. Strange, Cage manages to recruit Satana.

This team of T'Bolts disbands after the events of Fear Itself making their disappearance look like an unexplainable jailbreak.

The latest team of Thunderbolts is led by Red Hulk, as the team is named after his nickname, "Thunderbolt". This team's members were Agent Venom, Deadpool, Elektra, Ghost Rider, Red Hulk and Red Leader. However, the team has since disbanded after Punisher's attempt to kill the other Thunderbolts after Red Leader had planted a bomb in Frank's apartment causing him to believe that Ross wanted no loose ends. The only Thunderbolt that Punisher managed to kill was Red Leader who was later resurrected to fight against Doc Green.

Community content is available under CC-BY-SA unless otherwise noted.