As an added bonus, there is a lot of information available about each villain by clicking Bio at the bottom right. Villain Archive fights are always free and do not require Simulator Points.

Defeating a villain does not grant XP to the Agent or Heroes. 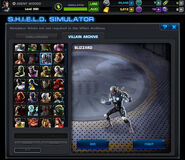 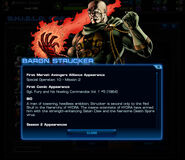 Retrieved from "https://avengersalliance.fandom.com/wiki/Villain_Archive?oldid=906386"
Community content is available under CC-BY-SA unless otherwise noted.